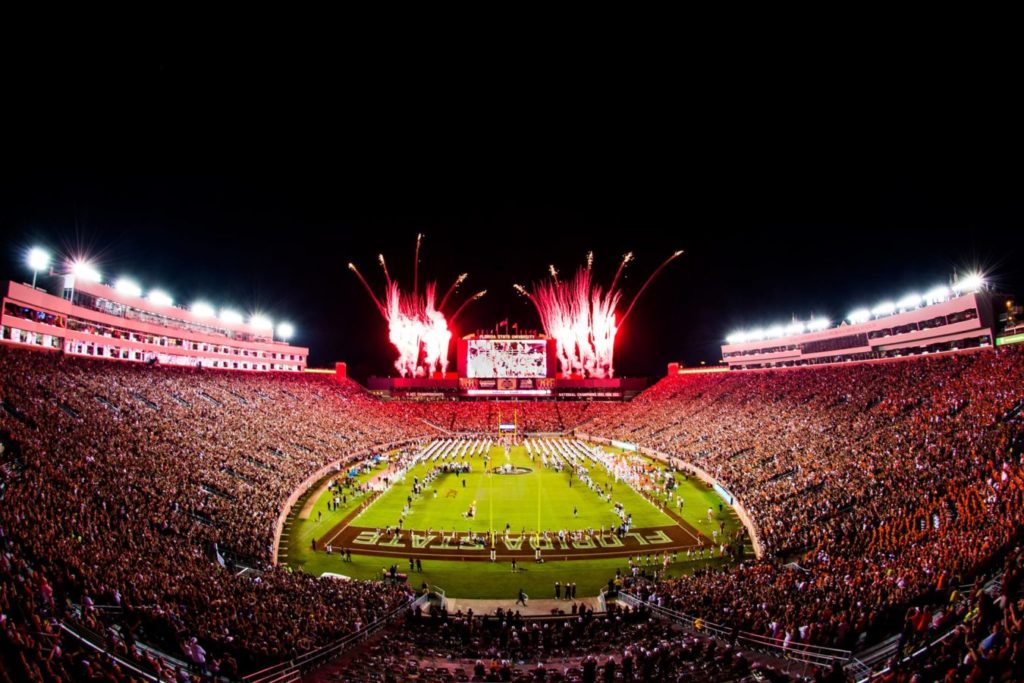 On the other hand, the 1950 Homecoming half-time show included a dedication ceremony naming the stadium in honor of university President Doak S. Campbell. Marching Chiefs band made a special performance and “FSU Fight Song” was premiered. Dr. Campbell was president of Florida State College for Women, as it made the transition from an all-female school under that name to the coeducational Florida State University, between 1941 and 1957. During his time as a president of the university, he supported a sports program at the school and encouraged the construction of a football stadium. Dr. Campbell retired from his position on June 30, 1957. However, he remained in the Tallahassee area as President Emeritus until his death in 1973.

Surprise to many, FSU football dates back to the early 1900s although most people would assume that FSU football started in 1947 when the University went back to being co-ed. In the beginning, FSU was an all-male school for its first years of existence from 1851-1857.

FSU first fielded a football team in 1900. By 1904, FSU had won their first State Title. All that was prior to the racist Buchman Act passing in 1905, which made FSU an all white female school. The act also caused UF to be an all-white male school and FAMU an all-black school for the next 40 years. Prior to that, from 1858 to 1904 Florida State was co-ed but with the exception of the 4 year period of the civil war. During the war, it became an all-male military school.

Additionally, FSU also had the honor of having Bill Peterson as their head coach from 1960-1970. Peterson, or better known as “Coach Pete, is credited with bringing the pro passing game to college football and was considered a unique character. He is also known as the “Coach of Coaches”. He tutored coaches such as Joe Gibbs, Bill Parcells, Bobby Bowden, Don James, Dan Henning, Ken Meyer, and many others. Coach Pete is also remembered for his reshaping of the English language. Last but not least, Peterson is best remembered for bringing the Seminoles to the forefront of college football, using pro-style offenses and a much-feared passing game.

For further information on the Doak Campbell Stadium at Florida State University, visit the pages listed below.

Sign up for our newsletter and get $5 off your first order!
You will also recieve a monthly “What’s On Guide” to your email!